We are interested in obtaining as much bang for the buck as possible. This tends to tilt things in the following directions:

Which infectious diseases are heavily researched and which are under-researched?

Figuring out how much research money goes into researching different diseases is a challenging problem. Lewison, et al. use a novel solution to this problem. They find that nearly all publicly funded research ends up getting published. They also find that the amount of research funding for a typical paper is in the range $50-250k, with a mean cost of $170k. To first order then, it is possible to approximate funding by counting the number of papers published in scientific journals.

WHO has published Global Burden of Disease estimates, estimating the cost of various diseases in Disability Adjusted Life Years, or DALYs. Combining the GBD data with a quick PubMed count for the name of each disease appearing in a paper's title gives the following (diseases with 5m or more DALYs/year): 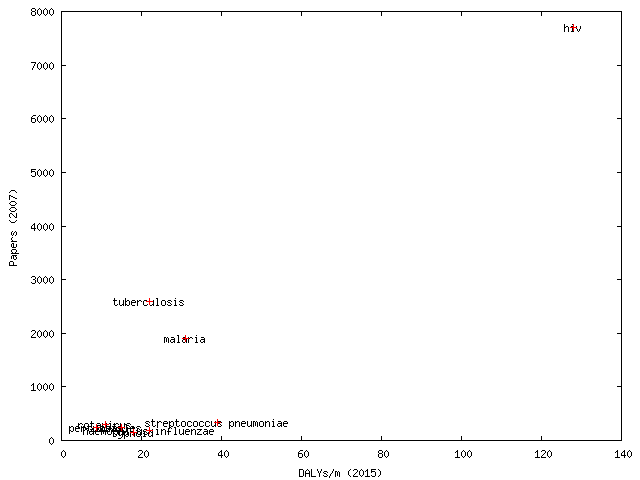 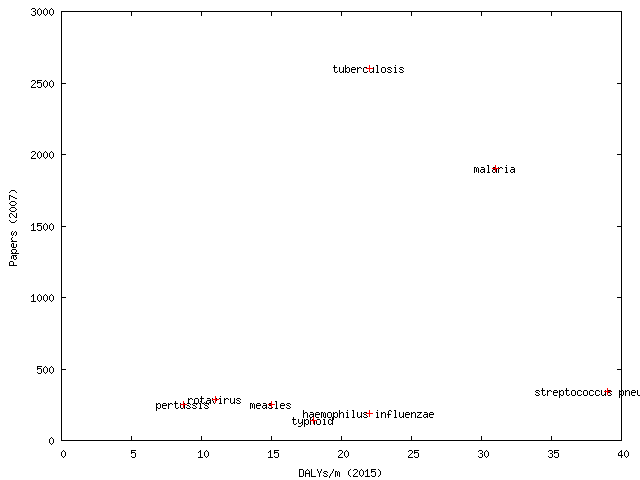 Or the raw data:

(DALY values that are estimates denoted "~" are based on infant and childhood death rates reported in The Vaccine Book discounted through age 80 at 3% without any age weighting applied; and further adjusted for 2015 by applying the change in DALYs from 2005 to 2015 for the WHO category within which they fall).

What to focus on?

At a gross level ignoring the disparity between diseases of the developed and developing world the allocation of research to different infectious diseases appears reasonable. Those that contribute to the greatest amount of suffering receive the greatest amount of research and this is in excess of the simple proportionality of the suffering. This is as it should be since a fixed dollar investment will have a higher payoff in a disease that causes more suffering. Additionally those diseases with a well developed treatment or vaccine get less funding than those diseases where the obstacles are scientific.

Assessing the work that might have the highest payoff for each disease: